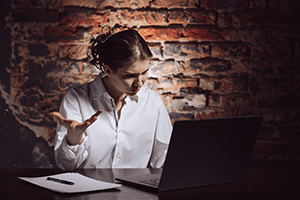 I often think that Wi-Fi is like a living thing, it behaves strangely and sometimes unpredictably. One of the most common questions I’m asked is ‘how do I get WiFi through stone walls’?

Stone walls can be a particular nuisance for WiFi but it might not be the only answer to your poor connection. It’s a safe bet that, at some point, there will be walls between you and your router: to identify if a wall is your issue, just take your laptop to the other side of it and see if the problem disappears.

Why are walls such an issue?

WiFi is an electromagnetic wave, like a radio or TV signal, and those waves are either reflected or absorbed by different materials before they get to your devices or back to the router. The amount that’s reflected or absorbed depends on the frequency and the material – it’s a bit like looking through tinted glass, the darker the tint the harder it is to see through.

Everyone’s property is constructed differently – the type of material or insulation used can affect your WiFi connectivity. For example, you could have thick stone walls or brick, breeze blocks or concrete. Stud walls or wood frames covered in plasterboard can have different levels of effect. And don’t forget that foil insulation or underfloor heating in the floors will affect WiFi as well.

Can the problem be solved…?

Yes, it really can. Although the law of physics will stop you getting the actual WiFi signal through the wall, there are other ways to deal with the issue.

The basic principle is to go around the wall, so if you can move the router you are effectively removing the problem. The problem is you can’t just pick it up and plug it in anywhere else. With ADSL or VDSL modem-based routers they plug directly into what’s known as the ‘Master Socket’.

Although you’re not allowed to modify the internals of the Master Socket, it is designed to allow you to add extensions to both voice and data. The data extension allows you some freedom to relocate the modem.

Option 2 – Knock the walls down

It’s a bit tongue in cheek, but it’s a real possibility! Open-plan living is a lifestyle that many people choose and it’s amazing for WiFi, if a bit severe.

Of course, if it’s a structural wall, removing it will be expensive and probably involve steelwork so I would not suggest you get the sledgehammer out without speaking to a professional! But, if you’re considering a re-model, think about how it could impact your WiFi and design accordingly.

Range extenders or repeaters are cheap and easy ways of making your WiFi go further. You need to position them so that they can ‘hear’ your router. As the name suggests, they work by listening and repeating, usually for distance, but they work around obstacles as well.

These are great devices. Like an extender, you plug them into the mains in your property but the difference is that they add the data to your mains power. This means other devices can then read that data, allowing you to easily run your network wherever the mains runs.

A mesh system uses a separate radio so that it can communicate to other devices in the ‘mesh’ while communicating with your devices. In some ways they are a lot like repeaters but are more advanced in how they operate, which gives better performance.

This also means that some mesh devices can communicate faster between themselves than they do to your devices, which, overall, provides better performance.

If you go into an office or large building, you can access the WiFi and move around. That’s achieved by using the specification 802.11r that allows a device to roam between access points, much like mobile phones roam between communication towers as you drive down the road.

Instead of communicating over WiFi, these access points communicate over ethernet cable and are a physical network connection. They are also capable of meshing, so you can create hybrid networks if required.

What can you do now?